Were you aware of the startling fact that annual cookbook sales in the U.S. is measured in billions of dollars? That’s billions with a B, gang…

As I type, kicked back in the ol’ recliner, there’s a pile of books on the side table; two on Mexican regional cooking by Diana Kennedy, Michael Ruhlman’s Ratios and Charcuterie, (With Brian Polcyn), Frederic Sonnenschmidt’s Art of Garde Manger, and Harold McGee’s On Food and Cooking. The Kennedy books are just acquired, having read of Frances Mayes’ appreciation for her work; the others are almost constant references that I use pretty much every time I write on this blog.

M and I own what we think are a lot of books; I’m looking over at four shelves, each three feet wide, two six feet high and two at four feet, pretty much full and there’re more in our bedroom, respective caves, guitar shop and night stands.. Of those, we have roughly four linear feet of cookbooks. A lot of the stuff we actually read, we buy used in paperback, read, share and then donate to the YWCA Resale Store. Cookbooks, on the other hand, are predominantly hard backs with shiny dust covers; some are even signed by the authors. 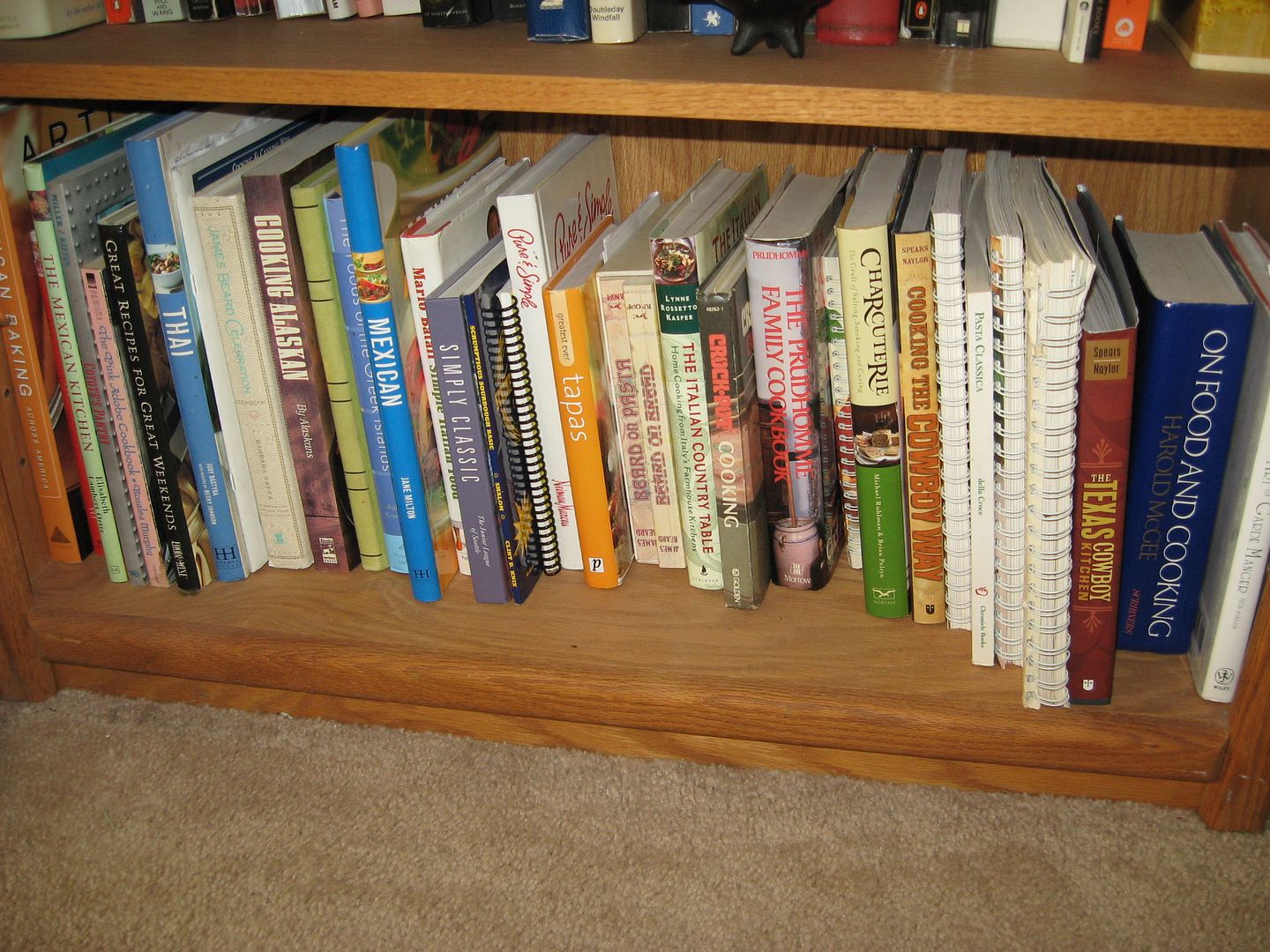 Here’s the rub; in our collection, we’re talking around 30 to 40 titles. If you’re a twenty first Century foodie, there a good few authors you’d recognize; Rick Bayless, Lynne Rosetto Kasper, Mark Miller, Grady Spears, Mike Simon, Maggie Glezer and Mario Batalli, to name a few. Despite all those bright lights, the books that get used consistently and frequently would be limited to Irma Rombauer’s Joy of Cooking and James Beard’s American Cookery. Those that I have actually read, cover to cover, would also tally exactly two; Harold McGee’s seminal volume and Claudia Roden’s The Book of Jewish Food. That’s what, .5% or thereabouts?

How does that stack up to your experience? An informal survey found most folks said things like, “Got it as a gift, never cracked it,” “Use it very rarely,” and things along that line: Truth be told, that’s probably the way things are supposed to be; cookbooks are, after all, reference volumes and not much more than that.

I’ve been cooking my whole life, for pleasure and occasionally for a living: That said, it’s time to share another secret. Putting up recipes here for y’all was actually quite a bit of work for me, because I do not typically use recipes; I cook from the heart and off the cuff, always have, always will.

To cook professionally, you must be able to put out consistent, repeatable, high quality food, and you have to be able to do that quickly and efficiently. I am a pretty good at best, but more to the point, I am quite good at the quick and efficient part. To do what I do pretty much unconsciously as a recipe, measured out and tested, is work! I’ve always been a great skier; in my teens, I became a ski instructor. I was doing great until they said “Those are really nice turns, how do you do that?” I stared back blankly at them and said something pithy like “Ummmmm, I uh, just turn…” In teaching me to teach, they first had to alert me to the fact that I was a great skier, not a skier who knew how to teach others what to do in a logical and repeatable fashion. Cooking is much the same.

That said, over the winter months, I’m gonna try and relate to you some tricks and tips and methods whereby you can cook the same way; the desired end result being that you, as I do, maybe steal concepts and themes from all those cookbooks far more often than you do simply repeat a recipe. Iron Chef Mike Simon, one of my culinary heroes, says he uses Beard’s American Cookery for ideas when he is in need of a new dish; sounds like a darn good idea to me!

Starting with the recipes IS important. Like learning anything else, repetition breeds familiarity, practice makes perfect, and routine is great so long as it is accurate and thorough. Somewhere along the experience timeline, you look up and realize that you didn’t really think about the fact that pasta dough is a consistent ratio of three parts flour to two parts egg, you just pulled out what you needed, measured, mixed, rolled, cut, boiled, served and it was fantastic; that’s the magic we’re after.

So, in a rambling way, what I’m proposing is that, if you want to cook and cook well, a few well chosen reference guides are a good thing, maybe even a necessity. What follows is just my recommendation; if you have them, pull them out, give them a go over, and we’ll go from there. If you don’t own them, go to your local bookstore, or hit up a good used seller on Amazon and pick up a copy; you can thank me later…

2 thoughts on “Ladies and Gentlemen; dinner is now being served in the Library”

This site uses Akismet to reduce spam. Learn how your comment data is processed.